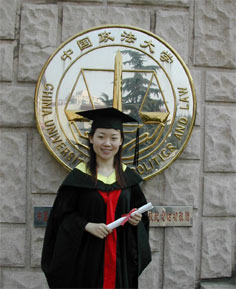 Very often people ask me why I did a second degree in law. I always find it difficult to explain in a few reasonably short sentences. Although going to Oxford was very much like a dream come true to me, I have to admit that I was, at first, not fully aware of what to expect or what to be expected of me. What I did know was that though it was not all going to be as rosy as the City of Spires in summer dusk, I had to make a leap of faith. Now four years have gone by since I first landed in the dream land, I have to say that getting involved in the Paterson Scholarship selection process was definitely one of the best decisions I ever had to make.

It was the pleasure to read Lord Denning's judgment at 1am in the morning. It was the heat of discussions with my tutorial mates in a tutor's room overseeing a summer garden. It was the adventure of a punting trip on a precious English sunny day with Pimm's and strawberries on board. It was the privilege to listen to Ronald Dworkin in the lecture room while thinking that Jurisprudence was probably the biggest waste of time in the human history. It was the shiver it gave me to think about having to sit the Oxford Finals 10 days in a row even months after I had completed them. It was the ecstasy walking out of the Examination Schools, red carnation on chest, head held high, friends holding flowers and champagne in the waiting crowds. These moments have all become reasons why I went to Oxford, endured the indescribable madness, and became enriched with experiences which I would never have had elsewhere. Looking back, it was a brilliant journey.

It never stopped there. It is ongoing. The confidence, knowledge and skills you have gained from Oxford, you take them with you wherever you go. From last year thus far I have the opportunity to receive some professional legal training in London. When I read the City AM newspaper every morning on the tube and the indicators of the economic downturn started to make sense to me, when I was put in a real work scenario trying to work out some investment structure that would suit the client's best interest, when I walked pass a board at a bus stop which advertised a book named 'When China Rules the World' and started to wonder whether it should be a "when" or an "if" question, I knew that none of these could have happened without my three years' fulfilling, yet sometimes admittedly painful, time in Oxford.

Was it worth it? Yes, absolutely. Was it difficult? Yes, indeed. We are no superman. But, as the proverb goes, nothing that is worth having comes easy. It applies to my personal engagements with this Island and its people. It applies to my peer Paterson Scholars who have done a wonderful job. It also applies to anyone who has dreams and plans for the future, Oxford or most likely otherwise. As much as you feel pushed and challenged to the edge of break down, you survive and grow and become a stronger, less short-sighted and more patient person. I am most grateful that the Paterson Scholarship enables me to pursue a route that brings the best out of me, the tremendous trust they put in me, and the care and support I receive from each individual member of this enlarging family. By no means can it be measured simply by monetary terms. For me personally and I am sure others would agree, it has been an absolute privilege.
Back to the List of Scholars