David Paterson was born on 21 June 1944 to Charles Eric Paterson and Joan Margaret Mary Constable Maxwell Stuart in Honington, Shipston-on-Stour in Warwickshire, England. He was educated at Stonyhurst College in Lancashire and studied Medicine at Oriel College, Oxford where he obtained his MA (Hons) in Animal Physiology. He was articled to Price Waterhouse in London and became a Fellow of the Institute of Chartered Accountants in England and Wales in 1973.

David worked for Samuel Montagu in London as a Corporate Finance executive and in 1976 joined John Swire and Sons in Hong Kong. In the latter company he held a number of senior executive positions before founding HSBC Private Equity Management Limited, in which he owned 25%, in 1987. HPEM became the largest private equity manager in South East Asia with over USD1,100 million under management, the majority of which came from US corporate and public pension funds.

David sold his shareholding in HPEM to HSBC in February 1998 and has since been retired. David has been a director of several publicly listed companies in Hong Kong, South Korea, London and Canada. He is currently a director of Interactyx Limited, a UK company involved in digital learning systems.

In 2007, David was appointed an Honorary Professor of The China University of Political Science and Law, Beijing.

Jayne Paterson was born on 21 August 1943 to T.Y.Tung and Lily Yuen in Shanghai, China. Jayne and her parents arrived in Hong Kong in 1946 and she was educated at Maryknoll Convent School in Kowloon until she went to the US in 1961 where she obtained her Bachelor of Arts degree.

She was married in 1964 and has a son, Brian, who is now married to Sandi and they have a son, Ty. Brian is a pilot with United Airways after having served in the US Air Force as a captain. Jayne returned to Hong Kong in 1971. Jayne worked in the fashion industry for many years and was the General Manager for Christian Dior in Hong Kong until she retired. 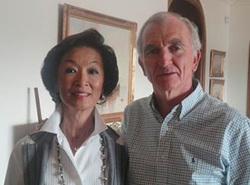 In 1983 David and Jayne were married. They have no children.

On 8 November 2000 David and Jayne were present when Her Majesty the Queen graciously opened the James Mellon Hall and David Paterson House, the cost of which was substantially provided by the Trust, at Oriel. The two buildings help to complete the process whereby all undergraduate students at Oriel are housed in college premises in the centre of Oxford.

David and Jayne now spend their time between their homes in London, California, Southern Spain and Hong Kong.