The Trust > The Scholars > Liu Bo 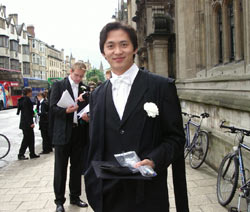 bMy name is Liu Bo and I am from Shenyang, China. With a sponsorship from The David and Jayne Paterson Educational Trust, I completed a Bachelor Degree in Mathematics and Computation at Exeter College, Oxford University, in June 2003.

My interest in Mathematics stemmed from my high school years in Liaoning Experimental Middle School, one of the best high schools in Liaoning Province, where I studied the Olympics Mathematics Course for three years. At fifteen, I won my first citywide Mathematics competition. In the final year at high school, I won the 3rd prize in the National Mathematics Competition. This gave me greater confidence in achieving my goal of studying a subject related to Mathematics at university. I also participated actively in extra-curricular activities as I believed that an all-rounded personality was also essential to being successful. My role as the school's publicity chairman and my participation in organizing Chinese dramas and editing of the school's English newspaper not only enhanced my leadership, organizational and interpersonal communications skills, but also greatly improved my problem-solving and analytical power.

After finishing high school, I was awarded a full scholarship to study for the International Baccalaureate (IB) Diploma in Li Po Chun United World College (LPCUWC) in Hong Kong, from where I graduated in May 2000. During the IB course, I was particularly fascinated by Mathematics, Physics and Chemistry, and enjoyed learning about computing. I also enjoyed playing for the College's Football Team and was the College Badminton Team leader as well as the Chinese Calligraphy leader. Being able to study in an environment with scholars from 70 different countries has broadened my scope of learning. The multi-cultural nature of the College has made me aware of the importance of international understanding.

I have only been in Oxford since October 2000. My academic work has been well carried out so far. After the first two months of university life, I have adapted to the new environment and fully installed myself at Oxford. I am a member of the Exeter College football team and play badminton for my College. I also work as a committee member in the Oxford University Asia-Pacific Society and am a member of the Oxford Chinese Culture Society. Not only have I made a lot of friends through these activities, I have also expanded my knowledge and have enhanced my social communication skills. I very much enjoy my university life.

Value of the Trust

I received the admission notice from Oxford in September 2000, but was worried that I may not be able to come. After all, the expensive tuition fees and living expenses were too much for a normal family with ordinary salaries in China. Finally, I was on the verge of giving up this valuable chance, one that did not come easy. However, with the help of The David and Jayne Paterson Educational Trust, I am now enjoying my university life in one of the most famous and prestigious universities - Oxford!

The Trust gave me the chance of further education and my dream to study in one of the best universities has come true. My family and friends are proud of me. But the Trust means a lot more than this.

Nowadays many Western universities have achieved leading positions in the world. They represent the most advanced levels of technology. Lots of outstanding students are thirsty for knowledge, but just don't have a chance or cannot afford to go to these excellent universities for further education. The David and Jayne Paterson Educational Trust provides us with a valuable opportunity to learn the latest technology.

Moreover, a country's future relies on education. A good citizen is a well-educated citizen, and much depends on the training he receives. China kept itself closed for thirty years. Our views were limited and some inappropriate decisions were made because of narrow mindedness. Only learning advanced technology is not enough to increase national strength significantly. We need to broaden people's horizons and introduce alternative ways of thinking at the same time. Fortunately, the government realized the importance of sending some young people abroad to learn the latest technology and to bring back the most advanced ideas. Here, I don't mean that one Trust can help all the youths in the nation, but it is one of the organizations that are devoted in providing us with an opportunity to study abroad.

After all, the number of scholars the Trust can support is limited, especially compared to about 2,000,000 graduates in China every year, it is only a very small fraction. However, and more importantly, the Trust is a pioneer in its field. In China, the scholarship system is very immature and at a primitive stage, and a lot of time and effort are required in its development. The Chinese have a famous idiom, which says, "Everything is difficult at the beginning." Although it is difficult, there is still the need for a start and successors to carry on. The David and Jayne Paterson Educational Trust has taken the first and hardest step, one that cannot be measured in terms of money, one that involves great courage and consideration, one that cannot be taken without extreme farsightedness and bold vision. On behalf of the countless students who are in similar predicament as I was a few months ago, I sincerely hope that more organizations and individuals with foresight will follow the Trust's footsteps and hold out a helping hand.
Back to the List of Scholars