The Trust > The Scholars > Zhou Yarui 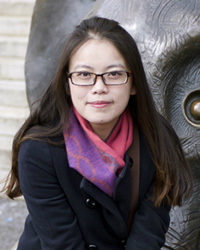 Globalisation certainly has the potential to bring about great advances for humankind, and judiciary is one of those. We are eyewitnesses to how borders of time and space that once separated countries and activities therein appear to be diminishing. I am deeply grateful that I have been sponsored to embark on this ship buffeted its way through waves in the tide of globalisation and bury myself in the most renowned legal education at Oxford.

Very often I have encountered people wondering why students formally trained in civil law countries go to common law countries for legal education. To be honest, I, at first, was not able to articulate specific reasons until I attended law schools in New York and Singapore as an exchange student. There, I read subjects conducted from comparative perspectives; I saw how a Singaporean argue with a British, or a Canadian with an American, about how their legal systems differ from each other. I then realize that globalisation denotes the end of geography, yet not of plurality of cultures. Cultural assumptions that seem natural obstruct our eyes to discern a whole picture in some way. Thus, to free me from being fettered, I actively involve myself in the process of building insights by learning and comparing a variety of legal cultures, along which journey Oxford is one of the destinations.

Above all, thank Mr. and Mrs. Paterson, thank the Trust and anyone associated for helping us further our academic journey. It is my expectation that the unparalleled strength in legal education, a long historical standing and diverse ethnic groups of Oxford would train me into a real lawyer rather than a mere craftsman of legal doctrines, and more importantly into a woman of integrity.
Back to the List of Scholars